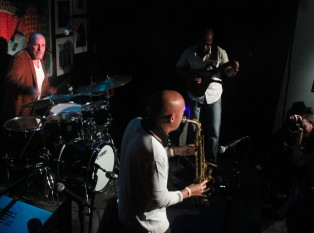 The ‘Sound of Next’ event was a tremendous success

On January 11th the showcase of the new OKeh signings at Groove in New York, as part of the Winter Jazz Fest, was a tremendous success. All 6 acts enjoyed a full house and at time the queues in the rain run around the block.

James Brandon Lewis opened the night with a powerful set of improvisations: ‘What I did hear in that time slot was a calmly smouldering performance by James Brandon Lewis, a tenor saxophonist originally from Buffalo, just barely in his 30s. Working with a pair of experienced partners, the bassist William Parker and the drummer Gerald Cleaver, Mr. Lewis dug in hard, accessing the sacramental side of 1960s free jazz. ‘Wading Child in the Motherless Water,’ his imploring hybrid of two foundational spirituals, was especially captivating business. I chose to see Mr. Lewis because I knew so little about him, and that small risk brought its bigger reward.’, writes the New York Times.

He was followed by trumpeter Theo Croker, whose energetic set brought the temperature in the room up and when Dee Dee Bridgwater joined him on stage for a song, the crowd went wild. Theo will be out with Dee Dee in Europe next month – check him out.

The Jeff Ballard Trio followed this set with a master class in improvisation. Tim Wilkins on a blog supreme: ‘My ‘peak musical moment’ was the Jeff Ballard Trio with Lionel Loueke and Miguel Zenon, on a tiny stage at Groove. Three superb improvisers at the height of their powers, having so much fun!’

Guitarist Nir Felder entertained his audience with his unique blend of jazz and rock and built his set to a fantastic climax, showing his incredible skills as composer and player in the same way. Some of the European Jazz Festival promoters picked his set as their favourite one from the night – a surprise for them.

Somi is such a rare singer and storyteller and her songs are deep and musically extremely interesting and here she showed that live as well she is a force to reckon with – a great band that played her material with passion and dedication, allowing her to let her vocals flow over the music and touch everyone in the room.

The evening was finished off in style by Craig Handy & 2nd Line Smith – a New Orleans take on the music of Jimmy Smith and how powerful and it is! The crowd started dancing after the first few bars and didn’t stop until the end and was rewarded with some extraordinaire sax soli by Mr. Handy. After a short intermission Craig and his group re-joined and opened a 40 minute jam session, to which Theo Croker and Nir Felder and more guests joined the band and had a lot of fun… and so had the audience!