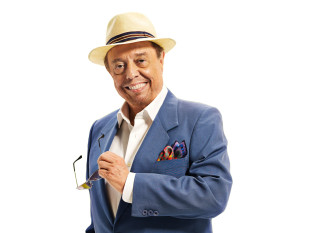 The new recording “Magic” featuring eclectic and upbeat Brazilian rhythms will feature guest vocalists John Legend, Maria Gadu among others. The album will be available in June in advance of the 2014 World Cup.

One of the most successful Brazilian artists of all time, Mendes has recorded more than 35 albums and has won 3 Grammy® Awards.

In 2012, Mendes received his first Oscar nomination in the music category for “Real In Rio” from the animated, 3-D feature film Rio. In addition to being the executive music producer for the blockbuster film, he also contributed five songs to the movie. Sergio Mendes will again provide the music for the upcoming animated feature sequel Rio 2 coming in April. Sony Classical will release the score for the film composed by John Powell on April 7th.

“Sergio is a music legend and we are proud at OKeh that he chose the label for the next chapter in his astonishing career,” said Wulf Müller, who oversees A&R for OKeh Records.

Bogdan Roscic, President of Sony Music Masterworks, said: “2014 will be an exciting year for Brazil and Brazilian music – and Sergio Mendes’ new album will be one of the records of the year. Everybody at Sony Music Masterworks looks forward to working with this true icon to deliver another outstanding contribution to one of the greatest catalogs in the business.”