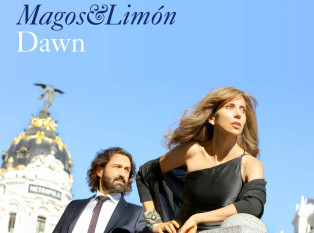 It’s seven p.m., in an indistinguishable neighborhood bar in New York City. There’s a man sitting alone with a cup of coffee, his guitar leaning against the wall. A tall, thin, young woman with a slow, elegant gait walks through the door. Without saying a word she approaches him, and sits down next to him.

This could be the opening scene of a novel or a French thriller from the 50s, but in reality, it is the start of an extraordinary musical adventure – a first encounter between two musicians destined to fall in love.

Magos Herrera, renown Mexican-born jazz singer and resident of New York City, has worked with the best jazz musicians from around the world for many years, combining her Latin roots with the sound of contemporary American jazz, thus, positioning herself among a musical elite.

The man sitting in the bar, Javier Limón, is a laureate composer, guitarist and internationally recognized producer, known for his collaboration with Paco de Lucia, Bebo and Chucho Valdes, Buika, Avishai Cohen and Wynton Marsalis, among others. He has become an indispensable reference in the genre of Flamenco and future international music.

DAWN represents an encounter between the profound, sophisticated voice of Magos Herrera and the intricate Flamenco guitar of Javier Limón, the convergence of vanguard jazz and minimalist Flamenco, a summit of sound for the 21st century.

It is an intimate trek through a repertoire of select American and Latin jazz masterpieces including songs such as Afroblue, Skylark and Blue in Green by Miles Davis and O que tinha de ser (What Has to Be) by Antonio Carlos Jobim, among others, while flirting with some new and surprisingly original compositions by the duo.

Be it in English, Spanish or Portuguese, the self-control of Magos’ interpretation and the power of her words and voice combined with Limón’s refined simplicity and harmony, in addition to the careful rendering of this project make DAWN a cutting-edge, revolutionary approach to Flamenco-jazz.

A blanket of silence in the air, fragile words, glances and emotions which mark the momentum of the recording production coupled with a live performance experience give pause to time affording a trek through an eternal DAWN.

Have a first listen below and pre-order the album here.