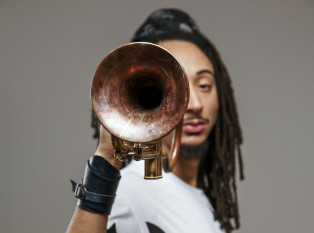 Theo Croker was born and raised in Leesburg, in central Florida, on July 18, 1985. Leesburg was not exactly a hotbed of music, and Theo wasn’t exactly born with a horn in his hand. He first picked one up at the age of eleven, after a visit to New York City where he heard his grandfather Doc Cheatham play at Sweet Basil. At sixteen, Theo moved, on his own, to Jacksonville, Florida so he could attend The Douglas Anderson School of the Arts. It didn’t take long before people noticed his talent. In 2004, Theo became the first artist in residence at the Ritz Theatre (a former black movie house transformed into a museum with a performance space).

After high school, Theo had his pick of the country’s finest music schools, but the great Donald Byrd, the multi-Grammy Award winning composer and recording artist, was like a magnet that pulled him to the Oberlin Conservatory in Oberlin, Ohio. After graduating from Oberlin in 2007, Theo began his postgraduate education, hanging out and playing with older musicians like Benny Powell, Jimmy and Tootie Heath, Billy Hart, and Marcus Belgrave. “They taught me how to live my life. Things not to do that they did, and things to do that they didn’t.”

He received the Presser Music Foundation Award in the spring of 2006. He used the grant money to record his first album, The Fundamentals, in New York City with his band The Theo Croker Sextet. In 2013 he has won the Marcus Belgrave National Jazz Trumpet Competition in conjunction with Detroit Jazz.

“What Theo presents on “Afro Physicist” is a musical summary of creative ideas. You’ll find jazz, rock, funk, triphop, free, African, smooth. He likes to call it ‘Dark Funk’. I think you’ll like what you hear. It’s fresh with recognizable musical forms to guide you on his ‘Dark Funk’ journey. Welcome to the world of Theo Croker, “Afro Physicist”, purveyor of ‘Dark Funk’. Now, fasten your seat belt…” Dee Dee Bridgewater, Producer

Have a first listen below, pre-order the album here or download the album on iTunes.