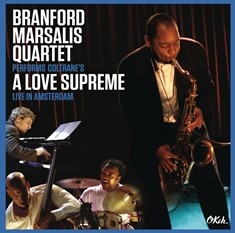 For this DVD, label founder Branford Marsalis and his quartet have been captured in a complete performance of John Coltrane’s 1964 masterpiece “A Love Supreme”. This legendary suite, which tenor saxophonist Marsalis included on his label’s premier release, Footsteps of Our Fathers, was performed at Amsterdam’s Bimhuis during a European tour in March 2003.

“One thing about “A Love Supreme”, it takes tremendous concentration and focus from every member of the band. The first time we played the whole thing live, all we could do afterward was sit in the dressing room for 20 minutes, totally exhausted. You don’t see this band in that shape too often. By the time we got to the Bimhuis, though, we were up to the challenge.” said Marsalis.

What has resulted – a scintillating live performance, plus informed musical commentary and a rare visit with Alice Coltrane – makes “A Love Supreme Live in Amsterdam” still today a must for all fans of Coltrane’s and Marsalis’ music.

This historic Marsalis Music DVD, including this full performance plus bonus interviews and audio-only disc, will be re-released on April 13th 2015 to celebrate the 50th anniversary of the release of the original John Coltrane “A Love Supreme” album, which happened in February 1965.

The music is also available on Vinyl for the first time! Get your vinyl here